No matter what the situation may be, there are always people rooting for the underdogs. Is it their 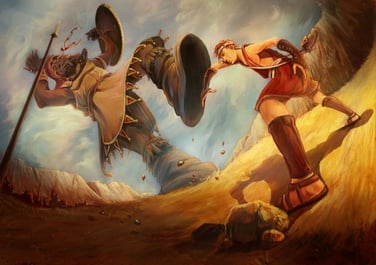 likeability? Their innocence compared to the big dogs? There are a lot of things that make people cheer for the underdogs, but the business world is like the ever popular story of David and Goliath. Big companies, or in other words the Goliaths, seem to dominate in sales because of their size. However, smaller businesses, or the Davids if you will, have a competitive edge that can put them on top.

One of the hardest things about being a David in the business world is that potential customers are skeptical about the product or service that they could be receiving. Will it be as qualified as what the bigger companies are offering, and is it worth the money? So, the Davids load their slingshots with paying attention to detail and top notch customer service. In addition, any size company can take advantage of ecommerce and social media to appear as big as possible. The internet is what provides a level playing field for businesses and gives small business what they need to compete at the highest level possible.

However, utilizing the internet in your business doesn’t automatically make everything peachy. A company could have a killer concept and offer state of the art technology but end up with nothing. Focusing on customer experience is the most important thing that small businesses focus on to rise to the top and knock out the big competitors. Also, successful small businesses do not aim to accomplish what big companies do. Big companies sometimes create an ego that makes them “too good” for small niches. This opens up a door for the smaller companies to barge in. Targeting the small niches of the world will launch the business sales of small companies and prove that a lot can be done with a smaller budget.

Big companies can also afford the crème de la crème of advertisements, commercials, and advancement to connect to the public and make sales, but by small companies using the underestimated power of a tweet, Facebook update, or Instagram post, they are reaching the ideal customers that they need to connect with in order to be a competitive business on any level. It’s not about just connecting with customers though. It is about delving into them in a way that large companies can only imagine being able to do. Basically, this particular road to success in a small business is about leverage; doing more with less. Davids buying customers is probably not in the market, so they make it a point to form relationships with the customers they do gain to make them rely on what is offered and enjoy the service provided. Go that extra mile with your customers that Goliath is physical not able to do, which brings me to my next point.

Going the extra mile is one thing, but doing so quickly is another. Both David and Goliath had weapons with the potential to kill, but David’s sling shot and stone had the ability to reach its target much quicker

As you can see, the internet is the key to leveraging great content for small companies and for making their products and services as qualified as what larger companies offer. The Davids of the business world have a lot to offer despite their size and budget and are able to portray that through the means of the internet. However, a lot of planning and strategizing also go into a small company’s successes, and the sling shot needs to be pulled confidently and fearlessly.